Letter to the President Elect

Barack. Rocky. Peter. (Your constituents who speak ecclesiastical Greek will get that) I think, now that you will be the president of these Estados Unidos, that you have a responsibility to comedy during your term.

It is a little known fact that good sketch comedy is the key to the well-being of this great nation and that we are the only nation for whom this is true.

When vaudeville died, we got the Milton Berle, Your Show of Shows, Caesar’s Hour, and the Vietnam conflict.

What precipitated the end of the Vietnam War, President-Elect Obama? Rowan & Martin’s Laugh-In ushered that in, sir, and Dick & Dan were answered by Saturday Night Live. And during Reagan’s worst years? Saturday Night Live afficionados call those “the Forgotten Years.”. Do you remember Gary Kroeger, Tim Kazurinsky, Mary Gross, or Joe Piscopo? It falls to me to remember that as the chronicler of sketch comedy which I think makes that point. And during the okay Reagan years? Those are known as “the Eddie Murphy Years.”

In 1989 we were gifted with In Living Color was nectar and in 1991, the State was sweet ambrosia. In 1993, the State was cancelled. In 1994, we lost In Living Color. In 1995 the Kids in the Hall broke up and when Mike Myers and Dana Carvey left SNL, it seemed that laughter was falling like duckpins.

And they were the last. Saturday Night Live continued and continues, but, it’s… terrible. Mr. Show was the last.

And then, last year, we were blessed by the Whitest Kids You Know and I knew that, one way or another, things were looking up.

And so, I implore you, Peter, pay attention to sketch comedy in your term and America will repay you.

Thank you, and goodnight.

I Am A Writer Maybe

So, I found my self thinking today about how I only really wanted to be a writer as a sad way of avoiding dealing with acting, and the insanity of that industry, and let us be honest, the fear of rejection. It was a real “Fraud Police” moment, and it had been building for some time.And then I began to think about when I wanted to act, and when I wanted to write, and it seems to me that – though my third grade teacher Mrs. Brown said I was going to be a writer – it didn’t really come to me as something I wanted until middle school, maybe. Definitely high school. When I was 15 I joined the theater club, and that’s when it started, I think. Acting was fun, and I wanted to do more of it, but writing was fascinating. And so my first real explorations into writing were playwrighting. I wrote absurdist short stories (the worst kind of Dadaist garbage), and I wrote plays. And I read lots of plays, too.

Later, I got interested in screenwriting and read the requisite Syd Fields, wrote in that format, but it wasn’t until much later that I came to fiction writing.

So, that feels good to remind myself of. That the desire to write has been with me a long time, and isn’t just a cop out. 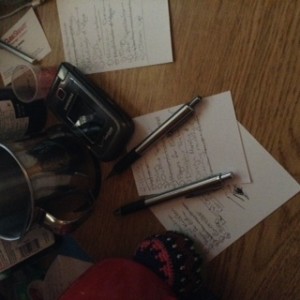 This is a photo of my desk at the time of this posting. It even features some writing.